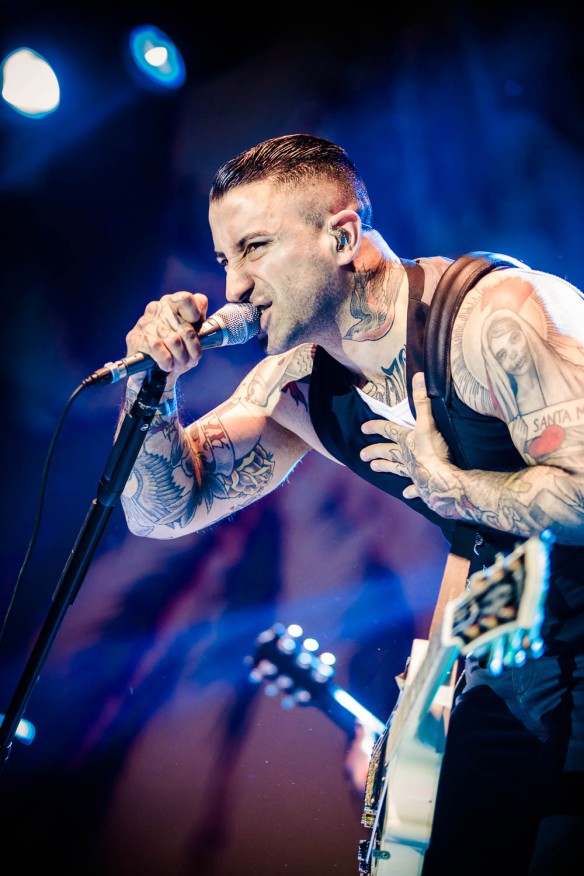 On 1 May I had the opportunity to talk to Chris Kubczak who plays organ & keys in the Broilers. I’m pretty sure that most of you had never heard of the Broilers before, maybe not before Groezrock 2015. Unless you are a punk rocker living in Germany, then you have little till no chance that you had never ever heard of The Broilers. These Düsseldorf punk rockers have been around for about 21 years and are pretty big in Germany.

The first time I heard about the Broilers was back in 2007 when they released their ‘Vanitas’ record through People Like You Records. “After the release of the ‘Vanitas’ album in 2007 things have been great for the Broilers. We started to grow, in 2011 we released the ‘Santa Muerta’ album and last year the ‘Noir’ album. Things have become bigger and bigger which is amazing.”, Chris added.

The Broilers are pretty big in Germany but small or unknown in the rest of the world, except for the other German speaking countries. How come? Well Chris confirmed that the language barrier, in a way, forms a barrier for the Broilers to play abroad, because most of the songs are in the German language. But hey, it seems to work for Rammstein, but I guess they just play in a different league.

On Groezrock the Broilers played their first show ever in Belgium: “We’ve been to the Groezrock festival before as visitors but it is the first time that we play here. How come? Well I don’t know, we’ve never been asked before haha. We are really looking forward to see what will happen today. When we play abroad it mostly isn’t like the big shows in Germany.”, Chris replied. The Broilers played the Monster Energy Stage (the main stage) at 19h55. The tent was not totally packed but pretty full, the crowd certainly loved it and sang along. Guess there were a lot of Germans in the crowd ;-). Honestly, they totally killed it, and are in my top 3 of the best shows I saw that day.

Musically the Broilers have a divers sound. It is a catchy mix of punk rock, rockabilly, ska, …. “Well we all come from different backgrounds but we all like punk rock. These backgrounds just reflect in our music. When we have a certain idea for a song we work it out and try to play it as a punk rock song, as a ska/reggae song, or as … just to see what works best. That is also for the electronic elements in our sounds. This diversity in sound just happens naturally.”, Chris explained.

‘Noir’ certainly is the darkest Broilers album so far, I guess the industrial elements help creating that dark atmosphere but it is also the most personal album: “Like I said when we have an idea, we try it out and that is also for the more Industrial sounds on ‘Noir’.”, Chris responded. “The lyrics on this album certainly aren’t like the ones we wrote when we were teenagers, back then we had different problems.”, Chris added.

Currently the Broilers are touring, afterwards they will take a break to work on the new album. So in 2016 they will be taking a year off and hopefully they will be back in 2017 with a new album.